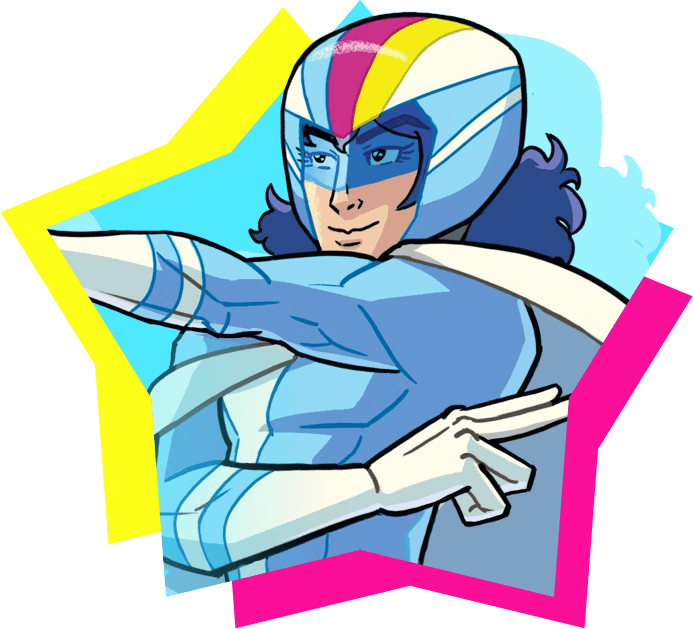 Dan Avidan is a tall, thin intergalactic musician who provides singing and occasional rapping for the universally beloved space band Starbomb. Dressed in electric blue and coiffed with a mane of long, flowing Earth hair, Dan Avidan's luscious, buttery vocals have been broadcast and celebrated across all corners of the known multiverse.

Inspired by legendary musicians who came before him such as Max Rebo and David Bowie, Avidan's continuing mission is to use music to spread love and good vibes across all intelligent worlds, and to also shoot lasers from his hands whenever possible. He is joined in Starbomb by Arin Hanson and Brian Wecht. Together, they perform songs satirizing video games. The group has three Billboard-charting albums, including their most recent album The TryForce, which was released in 2019.

Avidan, along with his two collaborators, is also part of the YouTube series Game Grumps. The channel has more than 5.3 million subscribers and features animated videos as well as Avidan and Hanson playing various video and board games. There are several other shows on the Game Grumps platform, including Grumpcade and Table Flip, both of which feature Avidan as co-host.

When he isn't lending his silky-smooth vocals to Starbomb or hosting YouTube shows, Dan Avidan performs as one-half of the musical comedy duo Ninja Sex Party alongside Wecht. Singing under the stage name of Danny Sexbang to Wecht’s Ninja Brian, he has performed lead vocals on the band's seven albums and played at film festivals such as Dragon Con, SXSW, and the LA Comedy Shorts Film Festival (LACS). In addition, he has lent his voice to several web series and podcasts, including The Indoor Kids, Co-Optitude, The Legacy Music Hour, Harmontown, and Did You Know Gaming? He’s also appeared as himself in series such as On the Spot and MatPat's Game Lab.